Friday 6 September at 7.30 pm
at The Wanstead Tap

A Journey Through Britain’s Knitted History

Over the course of a year, Esther Rutter – who grew up on a sheep farm in Suffolk, and learned to spin, weave and knit as a child – travels the length of the British Isles, to tell the story of wool’s long history here.

She unearths fascinating histories of communities whose lives were shaped by wool, from the mill workers of the Border countries, to the English market towns built on profits of the wool trade, and the Highland communities cleared for sheep farming; and finds tradition and innovation intermingling in today’s knitwear industries. Along the way, she explores wool’s rich culture by knitting and crafting culturally significant garments from our history – among them gloves, a scarf, a baby blanket, socks and a fisherman’s jumper – reminding us of the value of craft and our intimate relationship with wool.

This Golden Fleece is at once a meditation on the craft and history of knitting, and a fascinating exploration of wool’s influence on our landscape, history and culture.

“A compelling literary journey through the social history of wool in the British Isles” – Karen Lloyd, author of The Gathering Tide and The Blackbird Diaries.

“This is a book about wool and sheep, the making of Scotland, England and farming, textile manufacture, folk-lore and, crucially, the essential craft of knitting. The plying of wool had been a vital survival skill for over two millennia in Britain before the Romans showed up (bringing their own sheep with them, just in case) making this domestic skill a founding piece of ‘civilisation’. From fairy tales to debate regarding national identity, from the year dot to the tragedy of the Scottish Clearances and beyond, the history of plain, purl and intarsia is woven together by Esther Rutter, whose own skill with needles, learned from practical experience, attests that this ancient craft is nothing less than a wonder of civilization. Beautifully written, too” – Janice Galloway, author of novels, short stories and poetry including Jellyfish and The Trick is to Keep Breathing. 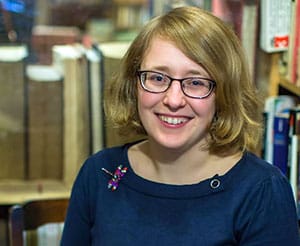 Esther Rutter won a scholarship and studied English at Magdalen College, Oxford. She has worked at the Wordsworth Trust and at the Robert Burns Birthplace Museum, and is currently Writer in Residence at the University of St Andrews. Growing up on a sheep farm in Suffolk – where as child she learned to spin, weave and knit – she retains an affection for all things woolly. She lives in Fife. You can follow her knitting adventures on Instagram at @thisgoldenfleece and Twitter at @thisgoldfleece.