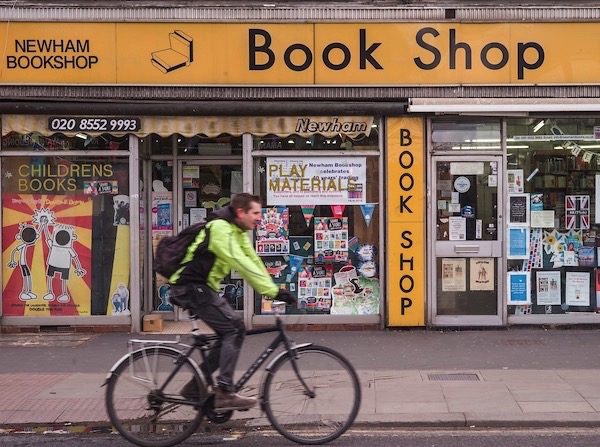 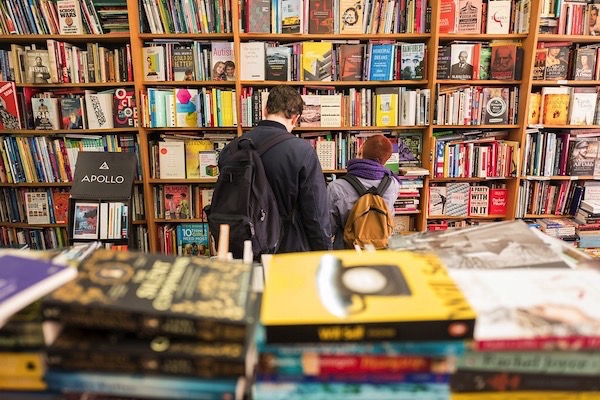 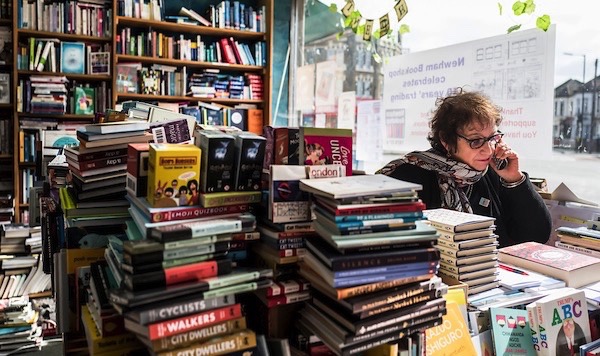 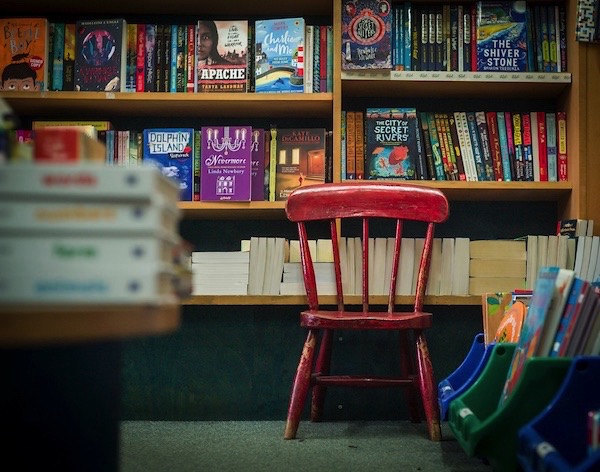 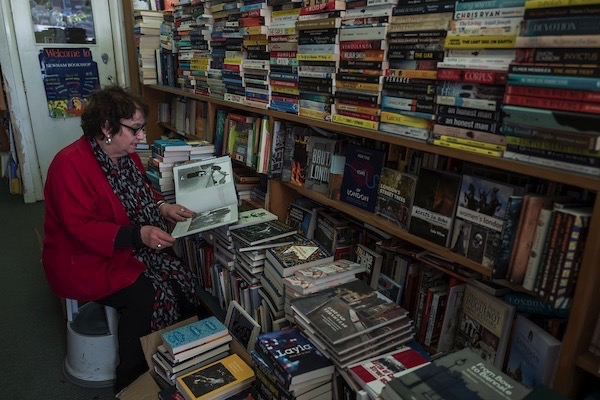 The loss to dramatic art when Vivian Archer quit her career as an actress in the theatre was an unquestionable gain for the literary world, which has benefitted immeasurably from her indefatigable ability as a bookseller ever since. As a writer and publisher, I appreciate her canny knack at selling stacks of books and her shrewd devotion to her customers immensely. Thus it was that Photographer Andrew Baker and I were more than delighted to pay a visit to Newham Bookshop to join in their fortieth birthday celebrations recently.

East End bookselling is an almost exclusively female preserve, with Denise Jones of Brick Lane Books, Jane Howe of Broadway Bookshop and Vivian Archer as the three stars in this particular heaven. Each of these bookshops has its distinctive personality that reflects both the character of the bookseller and the location of the shop. The crowded shelves of Newham Bookshop create an atmosphere of generous plenitude which makes it especially welcoming and also particularly difficult to leave, since the glorious disarray offers an almost irresistible invitation to extended browsing and the tantalising possibility of unexpected discovery.

Vivian Archer sits behind the counter beside the front window of her shop enthroned as a queen among booksellers, ably supported by highly capable and equally enthusiastic attendants. Yet she revealed to me that her attention occasionally strays in the mid-afternoon. “Sometimes, I spot Terence Stamp on a sentimental journey,” she confessed affectionately in a stage whisper, harking back to her acting days wistfully, “He comes to wander around his old neighbourhood and visit the site of his father’s shop.”

Drawing her away from her devoted customers, I persuaded Vivian to join me in the quiet of the London section where we sat surrounded by copies of Spitalfields Life Books and she confided the story of her life as a bookseller.

“I used to be an actress but I decided I should get out while the going was good, while I was still working, and a friend had a bookshop in Hackney. She asked if I would come and help. So I did, and I absolutely loved it! I realised immediately that I could only work in a community bookshop, I could never work for a chain because I love interacting with people and I love reading. That’s how I started and I have never looked back.

“There is a connection between the theatre and a bookshop, I think – because it is about people connecting with people, but also the transition from the written to the spoken word. I love theatre and poetry and we have a big Theatre and Poetry section. Theatre helped me enormously by teaching me how to communicate and talk to people.

“I worked at several other bookshops before I came to Newham Books thirty-one years ago. I worked at one in Green Street round the corner, another in Norwich and another in Glasgow for several years. They were called the Paperback Centres and were supported by Vanessa and Corin Redgrave as part of their political activities at the time. When the implosion of that movement came, somebody told me there was a job going here and I applied for that.

“This bookshop was originally founded by a group of parents and today it is a non-profit-making organisation owned by an educational charity. It was founded as a community bookshop where everyone could feel comfortable walking into it and that for me is very important because we have customers with many different needs. Obviously, it has changed a lot as the area has changed over the last thirty years and we can always tell who has moved into Newham recently by the dictionaries we sell. When I first started, it was Bengali and Hindu, but they are into the second and third generation now and it is all Eastern European languages, plus Portuguese and French.

“At the start, I listened for a year or two to what people wanted and then I changed the nature of what we stock. There are certain areas that are really important to me, derived from listening to customers: Local History, Politics and Poetry. The major change over the last thirty one years has been the growing competition from supermarkets and online booksellers. They have monopolised the sales of bestsellers by discounting, whereas when I first started there was the Net Book Agreement which set the prices at which books could be sold. We all sold at the same price and you just had to be a good bookshop and customers would come to you. It’s really sad that we lost that because Germany and France still have it and their booksellers are not struggling in the way they are in this country.

“So we have had to look at things differently. You have to be proactive. We go into schools and do book stalls and we take authors into schools too. This is still a poor area and there are many children who have never owned a book. As part of World Book Day, they get a voucher from the school to choose a book for free and, for a lot of children, that is their first book. At the end of each term, head teachers bring children who have done well here and they are allowed to choose a book. Then they come back to the shop with their parents.

“Over the years, we have organised a lot of readings and we find they are very important in championing new authors and widening the range of people who might come to a literary event, so I am very proud of that. We have very many long-term customers who are very loyal, particularly for Local History which is just huge for us.

“Monica, one of our customers, bought her books here while was training to be a nurse and when she got her degree she brought us a graduation photo. We advised her as best we could and she felt we had been instrumental in her getting her degree, so we display her photo in the shop. She works at the Royal London Hospital in Whitechapel now and she’s very senior. We have a lot of customers who remember us in that way.

“When the West Ham ground was across the road, it was rammed here on a Saturday afternoon with football fans before and after the match. You couldn’t move in the shop for about two hours and we always did big signing sessions with footballers like Geoff Hurst and Trevor Brooking. Five hundred people came for Clive Best last year.

“I love this job. It was my seventieth birthday last week and I could have retired ages ago, but I love talking to people and hearing their stories. It’s the buzz of it and the events – we do so many now. We are known for it. We may be a little shop in east London but we do events all over London! We are really proud of that.” 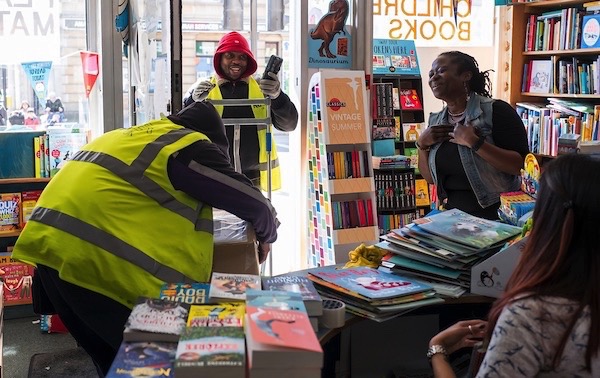 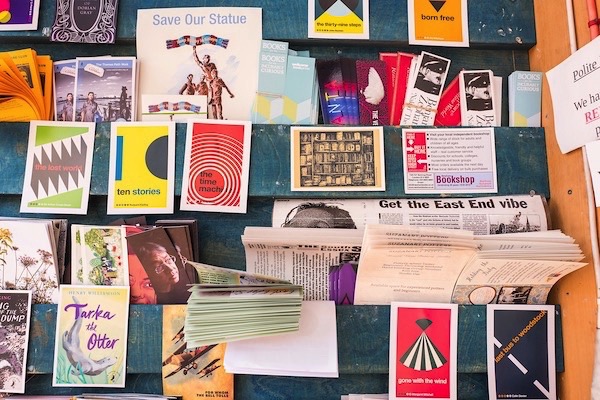 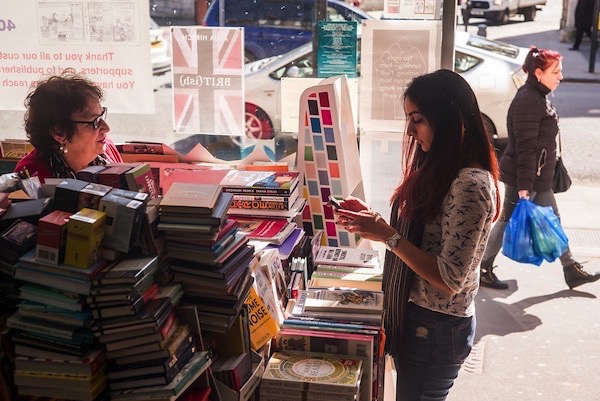 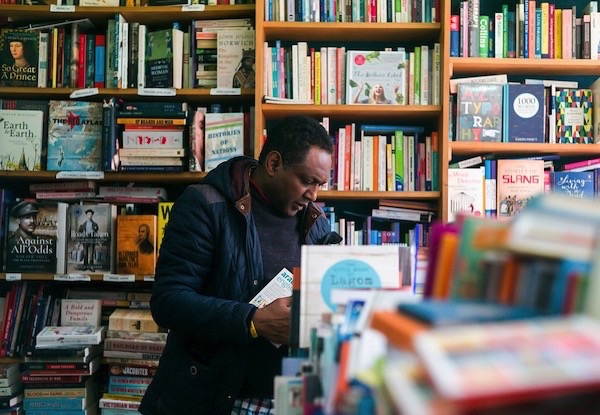 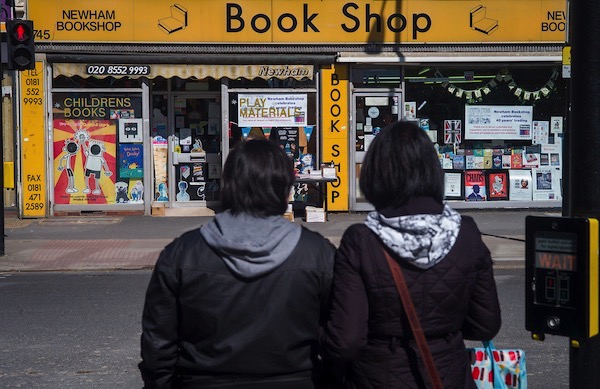