The publishing industry has rallied round to support Newham Bookshop’s charity drive for victims of the Grenfell Tower in London.

[Manager] of the east London store, Vivian Archer, said she was “absolutely overwhelmed” by the clamouring of support from publishers and authors to help victims of the fire in the 24-storey block in north Kensington on Wednesday [14 June] after she issued a fundraising appeal on Twitter. The major incident has led to the deaths of 17 people, with 17 more in critical care and many others missing.

The @NewhamBookshop account was then inundated with offers from publishers and authors and retweeted 100 times within an hour. Archer is now continuing the appeal into next week.

Many publishers such as Penguin Random House, Serpent’s Tail and September Publishing began biking round books and authors such as Matt Haig, M G Leanard, Lisa Thompson, Anna Mazzola and Nikesh Shukla offered signed copies of their books for the appeal, with responses still flooding in.

Archer, who has run the shop in Barking Road for 30 years, told The Bookseller the response had made her “very emotional”. She said: “It was such an awful thing that happened. We have a lot of tower blocks in Newham and I thought we would raise a lot through something like this. We sent the tweet out at 7.30 this morning and the response has been unbelievable. I’ve not had a chance to catch up with all the emails which have come in because there have been so many.

“People like Penguin Random House, Serpent’s Tail and September Publishing have been in touch as well as authors such as Matt Haig and Stuart Heritage. Around twenty people had got in touch within two hours of the tweet going out.”

She has been taken aback by the offers of help: “It has been amazing, I am absolutely overwhelmed, and is making me very emotional. We’ve had a huge reaction from authors and publishers.”

Author Vaseem Khan was dropping off copies of books from his Baby Ganesh Agency Book series (published by Mulholland Books and Redhook) as The Bookseller interviewed Archer. He explained why he felt compelled to help his local bookshop, which has been running since 1978: “I live near the bookshop and here in Newham we have a number of similar tower blocks and it makes you question what more could have been done,” he said. “The shop is doing a wonderful thing – when a tragedy happens this is the sort of thing we need. When you see those horrific images, the people coming out of the building, you have to help.”

Khan believes that the industry has a responsibility to highlight social issues. He said: “As authors we have a responsibility. I try to show some of the social realities in Mumbai in my novels and this not a million miles removed. We have serious levels of inequality in London and we must highlight things like this, that things like this can still happen in places here. What happened could have been prevented. I am not blaming anyone in particular but the right material had been in the building it could have stopped this happening.”

Archer is charging a minimum donation of £10 for a strip of tickets for the raffle at the event with Mark Thomas, who is discussing his book The Liar’s Quartet (September Publishing) tonight. The response to the raffle has been so impressive that Archer has decided to keep it going next week. The shop has run other charity fundraisers in the past including one for refugees with help from actress Julie Christie.

Archer is now calling on the rest of the industry to organise similar schemes to help those affected by the fire. She said: “I would ask other bookshops to consider doing this as well.” Have a look at the Holding the Baby website. Visit the exhibition at Plaistow Library, which starts in March 2018.

If you lived in Newham or Tower Hamlets as a child, brought up your children in the area or worked as a childcare professional, then get in touch! Tell us where you roamed as a child and who made your tea, how you chose to bring up your children and why. What kind of childcare did you use, if any, and what do you think about childcare in the East End today? Holding the Baby will record oral history interviews, bring people of different generations together to discuss their experiences of childcare and create an exhibition and a website. 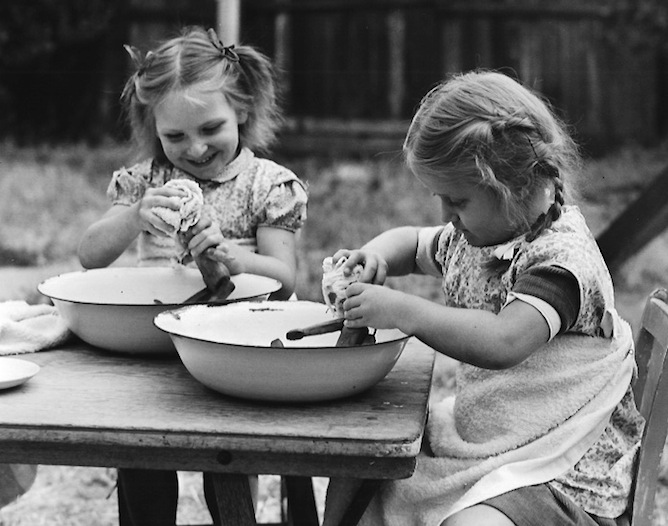 Holding the Baby is run by On the Record Community Interest Company, in partnership with Bishopsgate Institute, and is funded by the Gilda Street Trust. We’re delighted to welcome actors Julie Christie, Niall Buggy, David Calder, Andy de la Tour and Susan Wooldridge to The Wanstead Tap for an evening of readings of poetry and prose. We are sure you will enjoy this event which is being held to raise funds for the refugee charity Care4Calais. All proceeds from ticket sales will go to the charity, which was founded by a group of UK volunteers and aims to deliver essential aid and support to refugees in Calais and other areas, and to encourage the wider public to be more welcoming towards refugees. Crowds of fans battled their way through rain and snow to meet Nadiya Hussain at Newham Bookshop, where she signed copies of her debut novel The Secret Lives of the Amir Sisters, and her other books. Click here for details of the book. Join Penguin Pride celebrations at Proud Camden to mark 50 years since the decriminalisation of homosexuality in England.

Grab your discounted tickets to Penguin Pride at Proud Camden and stop by our pop-up bookshop on the night! We’ll be stocking a wide range of Penguin’s fantastic LGBT literature. Newham Bookshop mailing list members can enjoy half-price tickets, so come along and enjoy the fun.

The evening’s line-up will include live readings from Matthew Todd, author of Straight Jacket, and Paul Flynn, author of Good As You, spoken word performances from poets Toby Campion, Keith Jarrett and MC Angel as well as exclusive live music from Z-Star Delta and acoustic set from super-star headliner Kele Okereke of Bloc Party.