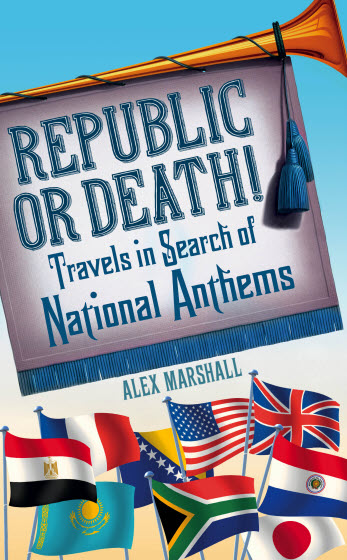 Republic or Death!
is published in hardback by
Random House at £14.99.

The Wanstead Tap is in a railway arch
underneath London Overground.
The nearest station is Wanstead Park.

Tickets £5 from
Newham Bookshop
or The Wanstead Tap

Travels in Search of National Anthems

There are a couple of hundred songs that are sung by millions across the world each day, that school children know by heart and sports fans belt out perfectly even after eight beers. And they aren’t pop songs — they are national anthems. These are songs which inspire the fiercest of feelings: for some they are a declaration of nationalistic pride; for others a rallying cry for revolution; and for others still they serve as a shameful reminder of past wrongs. And yet, despite the fact that for many of us they form a fundamental part of our national consciousness, the fascinating stories underlying the creation and adoption of each national anthem have rarely, if ever, been told.

In Republic or Death, Alex Marshall brings the incredible stories of the world’s national anthems to life. Taking in Europe, the Middle East, Asia, Africa and the Americas North and South, he embarks on an adventure that includes cycling the route along which French revolutionaries marched as they first sang La Marseillaise; entering a competition for the best singer of the Star-Spangled Banner; and attempting to bribe his way to an audience with the King of Nepal in order to uncover the story behind the only national anthem written on a Casio keyboard.

In the course of his enthralling and often hilarious travels, Alex encounters everyone from senior politicians and anthem composers to the sports fans and activists from whom these songs evoke such a wide range of emotions. Along the way, he uncovers the fascinating cultural and musical history of the world’s anthems, and also asks us to consider what they mean for us today.

Alex Marshall grew up in the area where London sinks into Essex. He is an award-winning journalist who has been writing about music and politics for over a decade, and who has been published in the Guardian and by the BBC, amongst others. He started investigating national anthems back in 2008. This is his first book.