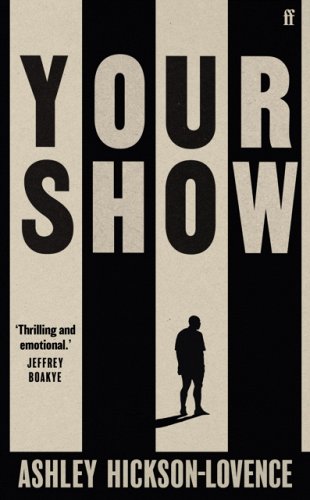 “It’s a double celebration tonight, not that many will care about your special role. You carry the weight of the occasion on your shoulders, take it in your stride. You’ve worked hard to get here, earned these palpitations…”

From Jamaica to Sheffield to the recently formed Premier League, Uri rises through the ranks as a referee, making it to the the highest level of our national game.

But along the way he is confronted with tensions and prejudices, old and new, which emerge as his every move is watched, analysed and commented on.

Your Show is an extraordinary novel which charts one man’s pioneering efforts to make it, against the odds, to the very top of his profession and beyond.

“Here is something entirely new, and brilliant: a novel-as-biography of the Premier League’s first black referee… It will linger with you long after you finish it.” — Andrew McMillan.

“Not only is this a thrilling and emotional look at the legacy of one of football’s most compelling heroes; it’s also wonderfully inventive, detailing a life lived with passion for the game, resilience against racism, hope and integrity. Ashley has written a real tribute to Uriah Rennie.” — Jeffrey Boakye.

“A novel rich in both poetry and detail, which documents the rises and the falls, the dismissals and the banishment, and the relentless determination of one man to defy the prejudices of others and to make his dreams real.” — David Peace.

“In prose as rhythmical as the beautiful game at its highest level, and as earthy as the stench of the lower league changing room, Your Show shadows Uriah Rennie from Jamaican childhood to Sheffield housing estate to a career of controversy as Britain’s first black Premiership referee, and from first whistle to last it enthrals and illuminates. A powerful, lyrical novel about race and masculinity and making hard choices.” — Andrew Cowan.

“Truly groundbreaking like it’s subject: Uriah Rennie. A vivid portrait of one man’s determination to make it as a top referee, against all odds. It’s full of detail and rhythm. A superb and very important novel.” — Stuart Kane.

“Your Show remakes the novel as an immersive, defiant, precise work of internal biography. The approach is as compelling and resolute as its subject.” — Tom Benn.

“A painful story in so many ways, but there’s something incredibly moving about Ashley’s depiction of Uriah and his passion for his sport, his generosity, and faith in humanity. Whether a fan of football or not, readers will love this novel, and its ultimate message – one of hope.” — Nick Bradley.