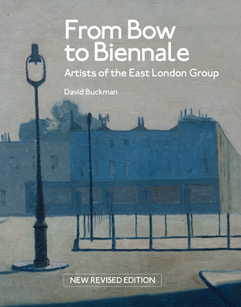 From Bow to Biennale is published by Francis Boutle Publishers in paperback at £30.

From Bow to Biennale

Although the East London Group achieved commercial success and huge media coverage in the late 1920s and early 1930s, its story has never been told.

Inspired by the charismatic teacher John Cooper, its artists achieved shows at the Whitechapel Art Gallery, Tate Gallery, in the provinces and annual exhibitions in the West End. By 1936, two Group painters were showing at the Venice Biennale. Arnold Bennett, Joseph Duveen, Aldous Huxley, Ramsay MacDonald, Edward Marsh, Michael Sadler, Walter Sickert and Osbert Sitwell were among its supporters.

From Bow to Biennale: Artists of the East London Group is based on correspondence and interviews with the last, now-deceased Group members plus primary and secondary archival research over many years. Extensive artist biographies are included plus chapters covering members’ involvement in film, the stage and poster work; Cooper’s mosaic revival; and his wife Phyllis Bray’s huge murals for the New People’s Palace in Mile End Road.

This revised edition includes exciting new material that has emerged since the publication of the first edition, partly due to the East London Group website and personal contacts. Fascinating sidelights on the lives of the artists involved in the group, as well as twenty-six newly discovered paintings and photographs, are included in an Afterword.

David Buckman has been a journalist and author for over 50 years, initially a staffer on several publications. While working in the London bureau of an American-owned energy magazine he travelled in Europe, North Africa, the Middle east and Southeast Asia. Going freelance in 1975, he wrote for numerous magazines and newspapers and made several hundred radio and television broadcasts. After the first edition of his dictionary Artists in Britain since 1945 appeared in 1998 (second, revised and expanded edition, 2006) he has concentrated on arts writing. He contributed to Macmillan’s Dictionary of Art and Brian McFarlane’s Encyclopedia of British Film. Monograph subjects include J.B. Mason, Leonid Pasternak, Martin Leman and Glyn Morgan; Mixed Palette, a study of Frank Ward and Kathleen Walne; Charles Debenham’s East Anglia; a biography of the sculptor A.H. Gerrard and more recently Lancelot Ribeiro – An artist in India and Europe. He has written many obituaries for the Independent, The Guardian, the Telegraph and elsewhere, is an advisor to the Public Catalogue Foundation and on the council of the Critics’ Circle.

“A fascinating and densely researched book… Buckman has pieced together an extraordinary story. All that’s needed now is an exhibition at the Whitechapel and a feature film directed by Ken Loach.” — Laura Gascoigne, The Oldie.

“A goldmine… David Buckman has a great story to tell… the book is an easy read, written by a reporter who has fallen for his subject.” — Simon Tait, The Times, on the revised edition.