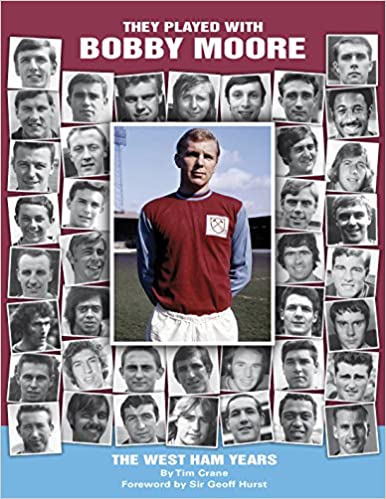 They Played with Bobby Moore is published by Tim Crane in hardback at £30.

They Played with Bobby Moore

They Played with Bobby Moore presents the colossal contribution made by the footballing genius through the memories of the men who shared centre stage with him from September 1958 until January 1974.

Bobby Moore played with 89 Hammers in West Ham United’s first team. His team-mates have never forgotten the experience. For the first time their stories and unpublished photographs have been showcased in one book:

• Billy Bonds tells how the blond haired boy from Barking presented his school’s football trophies when Bonds was just fourteen years of age.

•  Sir Geoff Hurst contributes the foreword and describes the effect Moore’s praise had on him.

• Vic Keeble shares the time when he threw the future England World Cup winning captain out of his house.

• The moment when Moore introduced Alan Stephenson to James Bond.

• The final interview with Andy Malcolm.

“Brilliantly researched, entertaining format with contributions on all 89 players who played with the great man in the first team at West Ham United, with interesting anecdotes from them or their surviving relatives about Bobby Moore or their time at The Hammers in general. Fascinating insight and a chance to relive times past at the Boleyn Ground. From Ernie Gregory in 1958 to Graham Paddon in 1974 all human life is here from the successful such as Harry Redknapp to those who have left us such as John Lyall to those whose lives ended in sad or tragic circumstances such as the aforementioned Paddon and Ron Brett. Plenty for the statisticians to enjoy too. A great concept and a labour of love.” — Sunnysidepete on Goodreads.com