For the safety of all our customers and staff,
please continue to wear a mask in the Bookshop,
use hand sanitiser and observe social distancing.
Thank you for your loyalty and support.

Online event on Crowdcast:
date and time to be announced My Story: Noor-un-Nissa Inayat Khan is the thrilling story of British-Indian World War Two heroine, Noor-un-Nissa Inayat Khan. It’s 1940 and hundreds of families are being forced to flee Nazi-occupied France. Noor refuses to stand by while Nazi forces invade her home and terrorise her people, so she travels to England and signs up to join the war efforts, despite her mother’s wishes. It isn’t long before her talents are noticed and she is chosen by Winston Churchill to sneak back into France as an undercover agent. Noor returns home – but this time, as a secret agent… Can Noor keep her true identity hidden, report her findings back to London and help the Allies win the war? Experience history first-hand with My Story in this all-new look!

Sufiya Ahmed was born in India and arrived in the UK as a baby. She lived in Bolton, Lancashire, before moving to London where she still lives. Sufiya has worked in advertising and in the House of Commons, but is now a full-time author. In 2010 Sufiya set up the BIBI Foundation, a non-profit organisation, to arrange visits to the Houses of Parliament for diverse and underprivileged school children. Sufiya also writes for The Independent.

We have signed copies of My Story: Noor-un-Nissa Inayat Khan available at Newham Bookshop.

Other books by Sufiya Ahmed 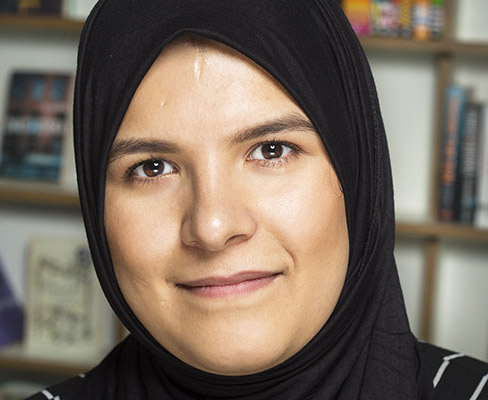 Mariam Khan
It’s Not About
the Burqa

When was the last time you heard a Muslim woman speak for herself without a filter?

In 2016, Mariam Khan read that David Cameron had linked the radicalization of Muslim men to the ‘traditional submissiveness’ of Muslim women. Mariam felt pretty sure she didn’t know a single Muslim woman who would describe herself that way. Why was she hearing about Muslim women from people who were neither Muslim, nor female?

Years later the state of the national discourse has deteriorated even further, and Muslim women’s voices are still pushed to the fringes – the figures leading the discussion are white and male.

Taking one of the most politicized and misused words associated with Muslim women and Islamophobia, It’s Not About the Burqa is poised to change all that. Here are voices you won’t see represented in the national news headlines: seventeen Muslim women speaking frankly about the hijab and wavering faith, about love and divorce, about feminism, queer identity, sex, and the twin threats of a disapproving community and a racist country. With a mix of British and international women writers, from activist Mona Eltahawy’s definition of a revolution to journalist and broadcaster Saima Mir telling the story of her experience of arranged marriage, from author Sufiya Ahmed on her Islamic feminist icon to playwright Afshan D’souza-Lodhi’s moving piece about her relationship with her hijab, these essays are funny, warm, sometimes sad, and often angry, and each of them is a passionate declaration calling time on the oppression, the lazy stereotyping, the misogyny and the Islamophobia.

What does it mean, exactly, to be a Muslim woman in the West today? According to the media, it’s all about the burqa.

Here’s what it’s really about.

Mariam Khan is a Muslim feminist activist, diversity-in-books pusher and freelance writer. She grew up in Birmingham and loves Hindi films and reading everything, especially middle-grade books and YA.

“An incredibly important collection of essays that explores the pressures of being a Muslim woman today. These essays are passionate, angry, self-effacing, nuanced and utterly compelling in every single way.” — Nikesh Shukla, editor of The Good Immigrant.

“Wide-ranging… engrossing… fascinating… these essays take a courageous and panoramic view of Muslims” — The Observer.

“A landmark anthology… frank and engaging essays on sex and religion, mental health in the Muslim community and queer identity from an impressive selection of writers and activists.” — Cosmopolitan.