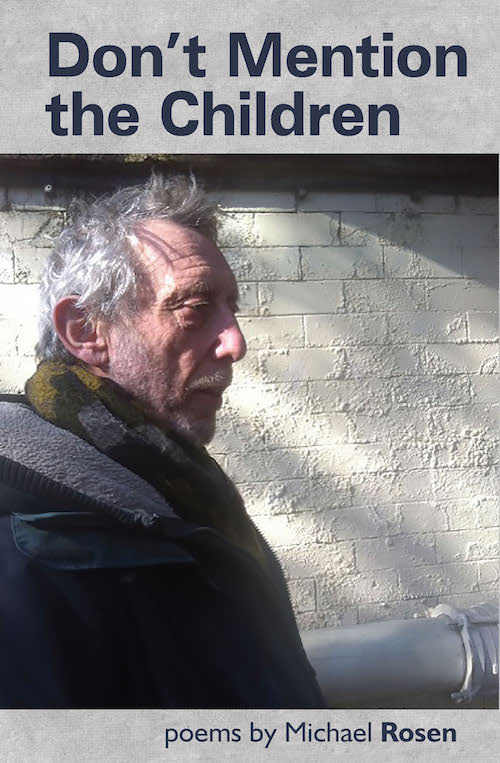 Don’t Mention the Children
is published in paperback by
Smokestack Books at £8.95.

Monday 9 November at 7.30 pm at The Wanstead Tap

Michael Rosen is one of the best-loved poets and writers for children, and a constant friend and supporter of Newham Bookshop over many years. His poems for grown-ups are less well known and Don’t Mention the Children is his first collection since Selected Poems in 2007.

Fans of his children’s books will enjoy the way these new poems combine the silly and the sinister to catch the surrealism of everyday life, somewhere between Jacques Prévert, Ivor Cutler and Adrian Mitchell. Few poets writing today can move so effortlessly between childishness and childlike seriousness. But at the heart of the book is a remarkable series of poems about anti-Semitism, fascism and war, connecting the contemporary world—UKIP, Marine le Pen, Palestine (the title poem refers to the refusal of the Israeli broadcasting authorities to mention the names of children killed during the Israeli shelling of Gaza in 2014)—to the lives of Rosen’s parents and grandparents—the General Strike, the Battle of Cable Street, Vichy and Auschwitz.

The Wanstead Tap is in a railway arch underneath London Overground. The nearest station is Wanstead Park.

Tickets £5 from Newham Bookshop or The Wanstead Tap

This event is now sold out.